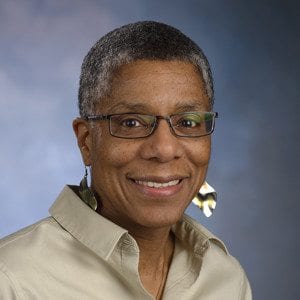 Her talk, “And They Raised Black Men: Black Women, Family, and Resistance in the U.S. South,” examined the lives and legacies of Francis and Louisa, two enslaved and later free Black women, and explored the still-present misrepresentation of Black matriarchy in popular and scholarly discourse. This historical sentiment was articulated in the Rev. Jasper Williams Jr.’s August 2018 eulogy for singer Aretha Franklin, in which Williams said, “A Black woman cannot raise a black boy to be a man.” The story of Francis and Louisa shows Black women have a long history of doing that.

Both women dared to be mothers and to pass on a legacy of family and kinship in a nation that refused to recognize the humanity of Black family and society during and after slavery.

Dr. West received her Ph.D. in English with a certificate in Women’s Studies from Emory University. Her scholarship is centered in interdisciplinary approaches to studies of the Black Atlantic, and much of her work explores intersections of spirituality and gender in early to contemporary Black women’s writings.

You can watch Dr. West’s talk below, introduced by Provost Risa Palm.

To read a transcript of the lecture, please visit: https://provost.gsu.edu/files/2019/02/Women-Inspire-Transcription-Elizabeth-West-2-5-19-ejw.pdf.