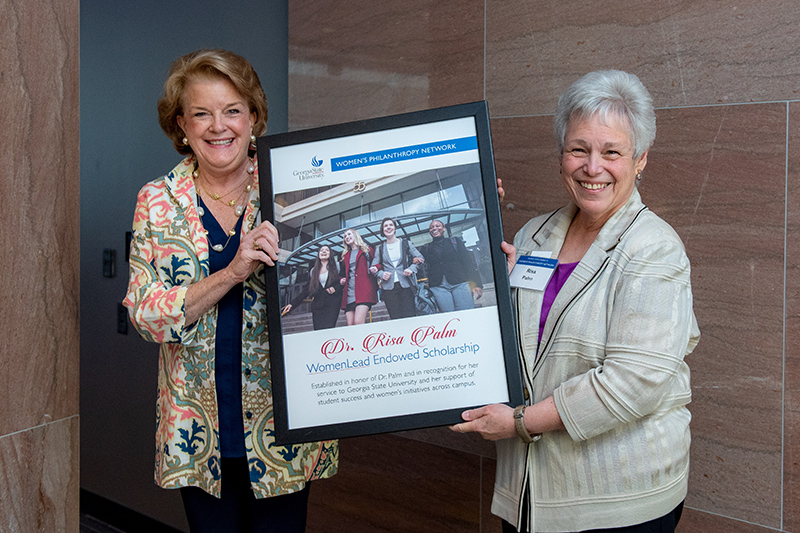 Nancy Mansfield (left), director of the WomenLead Program at Georgia State University, announced the founding of the Dr. Risa Palm WomenLead Endowed Scholarship in honor of Dr. Palm (right) and her contributions to women in leadership during her tenure as provost over the past decade.

The announcement was made on April 16 at the network’s luncheon.

The merit- and financial-need based scholarship will be awarded to students in the WomenLead Program, a professional signature experience that equips undergraduate women from all majors with the skills, experience and networking opportunities needed to get a seat at the table among leaders across all fields.

The scholarship is named in honor of Dr. Palm, provost and senior vice president for academic affairs since 2009. She will transition from her position as provost this summer, joining the university faculty to continue her research in geography.

“This endowed scholarship recognizes her service to Georgia State University, and her support of student success and women’s initiatives across our campus,” Mansfield said. “The scholarship awarded to women who come through the WomenLead program will impact generations of Georgia State students to come.”

In brief remarks to the Women’s Philanthropy Network, Dr. Palm recalled the film On the Basis of Sex, which dramatized now-Supreme Court Justice Ruth Bader Ginsburg’s efforts against sex discrimination in the justice’s early career in the late 1960’s and early 70s.

The events took place during the same timeframe when Dr. Palm began her academic career in geography, becoming the only woman in her department in her first academic appointment at the University of California-Berkeley.

“Ruth Bader Ginsburg made such a difference in showing that all the things that were discriminating against women were illegal, opening a pathway for my generation,” she said. “For those of you who are contributing to the Women’s Philanthropy Network, you are making a pathway for everyone to come.

“You are paying it forward, and I’m so grateful to all of you for what you’re doing, for women’s leadership in the future, for women in the future, and for Georgia State University,” Dr. Palm said.

You can read more about Dr. Palm’s career and her work for the inclusion of women by visiting https://provost.gsu.edu/risa-palm-research-inclusion-opportunity/.