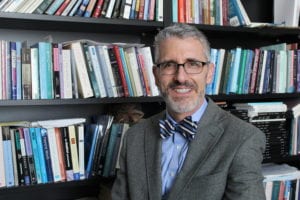 Growing up on Long Island, Dr. Andrew Cohen first found his love for the critical and theoretical in his high school history class. Cohen’s teacher, like any educator should hope to do, instilled a genuine curiosity in his students—they began seeking novel, intricate ideas both in and out of the classroom. Cohen said this experience in his education put him on the path to pursue philosophical endeavors moving forward.

In his undergraduate academic career, Cohen was exposed to different methods of philosophical thinking in Binghamton, N.Y., and fell in love with it. He went on to the University of North Carolina at Chapel Hill in their Philosophy doctoral program. Years after, he found himself at Georgia State.

Philosophy can be abstract and difficult to pin down at times, but Cohen’s work focuses on something more tangible, more real—historical injustice. For the past decade, Cohen has been working on what it is that we, whether it be individuals, corporations, states, owe to one another following a history stricken with injustices.

“One way of approaching controversial issues is to hope that the humanities can connect people despite their differences,” he said.

An empirically complex set of policies that Cohen works with are those of immigration. He is instructing a class that is discussing the topic this semester, as well. In it, core philosophies of immigration bubble up: what states are, whether states have rights to exclude, or whether people have rights of entry.

“This kind of work matters because it’s happening right now,” Cohen said. To put it plainly, part of Cohen’s work helps to explore what it is we have to do when things go wrong, and how we recover when we do wrong or are wronged ourselves.

Cohen is working on a book, Apologies and Moral Repair: Rights, Duties, and Corrective Justice, which aims to offer frameworks of solutions in response to these sorts of large, real-world issues. In the book, he grapples with big questions with complicated answers—what is the nature of apology? What is its purpose? What role does justice play in apologies?

These are all things Cohen aims to provide approaches to, in hopes of providing a philosophical structure from which an answer can be unveiled. “These types of ideas tap into the vein of public conversation about what we owe to one another, how we can be held accountable to one another,” he said. An example is the history of slavery in the United States, and how we can offer reparations for the historical injustices woven into the fabric of our past.

“The proponents of the system of slavery may be gone, but we still see the legacy of injustice in the past being compounded by inaction in the past—so these injustices are persisting across generations,” he said.

The combination of this kind of historical injustice and the apology that follows it in the form of reparation aligns closely with his work, and Cohen aims to use philosophy to piece apart a difficult issue such as this. “People are going to disagree about this. But one of the things philosophy can do is provide a framework for a solution to be achieved.”

In addition to political issues, amid a time where “call-out” and “cancel” cultures run rampant, Cohen also thinks about the ways in which public figures under scrutiny attempt to atone for what they have done—what has worked for some and not worked for others allows us to see the ways in which apologetical conduct is best handled.

However, moral theory, Cohen said, is rather messy. “There are moments of apology, both in real-life and fiction that are great examples of apology, but there are some that are muddled and ineffective.”

“A lot of what we do when we interact with someone is a mess. And we sort of muddle through our lives and figure things out as we go.” Cohen hopes that philosophy, in these moments of confusion or complication, can help systematize this mess for people.

“I would hope that the tools of philosophy can be something people can draw on to find some way to tap into this shared interest of respect among us,” he said.