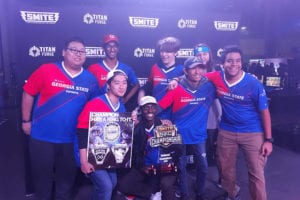 Members of the team who competed, including their player names, included:

Founded in 2017, Georgia State’s varsity esports program participates with other Georgia academic institutions in the Georgia Esports League and is among more than 100 colleges and universities nationwide participating in the National Association of Collegiate Esports. Team members are eligible to earn scholarships but are also expected to maintain high scholastic performance.

Varsity esports provide benefits beyond game play, including student participation in broadcasting, production, marketing, management and game development, a rapidly growing part of Georgia’s entertainment industry. The game “SMITE” is one example — the game is produced by Hi-Rez Studios, based in metro Atlanta.

Georgia State Esports also sponsors a semi-annual esports tournament, called PantherLAN, attracting players from colleges and universities in the Southeast. The most recent tournament this fall was held at Georgia State Stadium for the first time, attracting students, esports enthusiasts, game companies, entertainment companies and members of the public.

The Georgia State Esports program is housed in the Creative Media Industries Institute (CMII), and has oversight by the Executive Officer for Entrepreneurship in the Office of the Provost. Technical, logistical and production support is provided by the university’s Center for Excellence in Teaching and Learning.