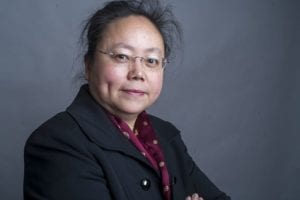 Jenny Yang, a Regents’ Professor of chemistry at Georgia State University and the associate director of the Center for Diagnostics and Therapeutics, has been selected as a National Academy of Inventors (NAI) Fellow, the academy board announced on Tuesday.

Dr. Yang, who holds 17 U.S. and 18 foreign patents in the field of protein engineering, is the first professor from Georgia State to be awarded an NAI Fellowship. She is one of 168 academic inventors who will be inducted during the annual NAI meeting on April 10 at the Heard Museum in Phoenix.

“I’m determined to make an impact in biomedical research and human health as a creative researcher as well as an innovative educator,” said Dr. Yang, who started her faculty career 23 years ago at Georgia State. “That I received such an honor at Georgia State means a lot.”

The NAI Fellows Program was established to highlight academic inventors who have demonstrated a prolific spirit of innovation in creating or facilitating outstanding inventions that have made a tangible impact on quality of life, economic development and the welfare of society. The program has 1,228 Fellows worldwide representing more than 250 universities and governmental and non-profit research institutes.

“She is the first from Georgia State, and as such she is emblematic of the successful outcomes of the university’s heavy investment in research infrastructure over the past several years,” said Nathanael McCurley, licensing associate in Georgia State’s Office of Technology Transfer and Commercialization.

In collaboration with the start-up company she founded (InLighta Biosciences) and researchers at Georgia State and Emory University, Dr. Yang has patented protein-based MRI contrast agents that are safer, more sensitive and provide the first non-invasive detection of early-stage liver disease including liver fibrosis and cancer.

She also pioneered the calcium study field she calls “Calciomics,” which incorporates chemistry, biology and neuroscience to develop computational studies and calcium sensor tools that can be used to detect signal changes in diagnosing diseases as well as aid in drug discovery.

Two of Dr. Yang’s patents have been licensed for commercialization.

“We’re known for our innovation in educational endeavors and this stands out as a first for Georgia State in terms of engagement in the intellectual property research community,” said Gwen Spratt, associate general counsel at Georgia State who assists faculty in patent advisement and technology commercialization.

“This award will be quite a stimulation for the faculty and the students,” said Dr. Yang. “It’s an important message that we can create first-class inventions at Georgia State with a pioneer spirit.”

— Anna Varela, Director of Communications for the College of Arts & Sciences
Originally published on the Georgia State University News Hub at https://news.gsu.edu/2019/12/03/georgia-state-chemistry-professor-honored-as-national-academy-of-inventors-fellow/