By Jeremy Craig, Communications Manager for the Office of the Provost 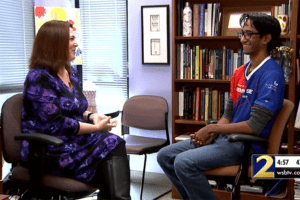 WSB-TV recently interviewed Praful Gade, a member of Georgia State University’s esports team, and his advisor, Dr. Page Anderson about the intersection between competing in esports, and his academic interests in psychology and neuroscience.

Gade, a student in the Honors College, is pursuing a double major in psychology and neuroscience. At Georgia State’s psychology lab, he is exploring how virtual reality and other emerging technologies can treat anxiety.

As a member of Georgia State’s esports team, he’s on the team competing in the game “SMITE” that has garnered the university multiple state championships, and this fall, two national collegiate championship victories in the game.

You can watch the WSB interview below.

If you are unable to view the interview, click https://www.wsbtv.com/video/local-video/student-researching-if-esports-affected-mental-health/PLUVM42E6AGVW4I3RYYOD5MXUI/.

You can also learn more about Gade through a feature article at the Georgia State News Hub website by clicking here: https://news.gsu.edu/2019/09/11/game-theory/.

Esports at Georgia State are housed in the Creative Media Industries Institute with oversight from the Executive Officer for Entrepreneurship in the university’s Office of the Provost.

Founded in 2017, Georgia State’s varsity esports program participates with other Georgia academic institutions in the Georgia Esports League and is among more than 100 colleges and universities nationwide participating in the National Association of Collegiate Esports. Team members are eligible to earn scholarships but are also expected to maintain high scholastic performance.

Varsity esports provide benefits beyond game play, including student participation in broadcasting, production, marketing, management and game development, a rapidly growing part of Georgia’s entertainment industry. The game “SMITE” is one example — the game is produced by Hi-Rez Studios, based in metro Atlanta.

Georgia State Esports also sponsors a semi-annual esports tournament, called PantherLAN, attracting players from colleges and universities in the Southeast. The most recent tournament this fall was held at Georgia State Stadium for the first time, attracting students, esports enthusiasts, game companies, entertainment companies and members of the public.

More information about esports at Georgia State is available at http://esports.gsu.edu.